- January 31, 2013
Comoros, pronounced Co-MORE-oh, with a silent s, is an adventurer's paradise.  A former French colony, this archipelago in the Mozambique Channel has been the site of 20 coups since gaining independence from France in 1975.  Things have calmed down since 2002 after the country had democratic elections, and become more attractive to foreign investment and tourism. Islands Of The Moon

While under French rule, colonists set up plantations on the islands, and about a third of the land on the islands is still taken up by plantations.  The islanders are Muslim and speak dialects of Comorian, though most also speak Arabic and French.  These are the descendents of Arab traders, French colonists, Persian sultans, African slaves, and Portuguese pirates.

Tourists can visit ancient mosques, royal tombs, a fortress, and sulfurous crater lakes.  Check out the protected green turtle, and threatened birds and insects at the marine reserve on Mohéli.  Hike through lush rainforests to see breathtaking waterfalls, and look for the giant fruit bat with a 4’ wingspan.  Wander through cities to view Swahili architecture and photograph carved doors.  Watch folk dancers perform throughout the islands.

The country is made up of four islands, though one of them, Mayotte, refused independence, and remained under French rule.  White sand beaches, palm trees swaying in the breeze that carries the scents of ylang-ylang and cloves; if that’s all it takes to be a tropical paradise, these islands have it in spades.

However, you won’t find massive hotels, topless sunbathing, or fancy cocktails, for Islamic law forbids alcohol, and women must be modestly dressed.  The SCUBA diving is terrific, and there is a dive school and shop at Galawa Beach, on Grande Comore.

There are two seasons here.  Wet season from December to April where temperatures will be in the mid 80’s, and dry season, from May to November which is a little cooler.

Grande Comore, the largest island in the archipelago, is also home to the largest active volcano in the world.  It’s last big blast in 2005, which flattened surrounding villages, created an unusual desert landscape on the mountain which has become a popular hiking spot.  The crater is accessible to hikers, and can be reached in a day from Moroni.  There is a bivouac at the top where you can spend the night.

The country’s largest exports are spices and perfume extracts.  The plantations produce vanilla, cloves, and ylang-ylang, lemongrass, jasmine, citronella, abelmosk, among others.  You can tour the distilleries where they process essential oils in Bambao.  They are the world’s leading producer of ylang-ylang, the essence used in Chanel #5, and the second biggest producer of vanilla. 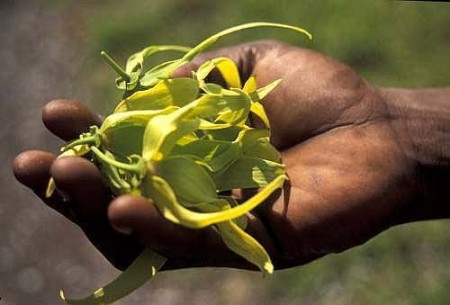 The tropical climate means that ylang-ylang grows year round but the ideal harvest time is in the wet season.  The blossoms are gently hand-picked, and immediately processed to retain the fragrance.  It takes 100 pounds of flowers to produce a quart of essence.  While the flowers are simmered with water in a copper vat for a few hours, the essential oil is condensed and drawn off.  Two subsequent distillations extract weaker grades of the essence.  All are bottled and labeled for export.