When To Visit Mykonos

- December 18, 2012
Mykonos is a Greek island situated on the Aegean Sea and is one of the most popular tourist destinations in the region. It is famed for its party atmosphere, beautiful scenery and gorgeous beaches but is also home to many cultural attractions. The tourist season stretches from around May – October and the best time to visit Mykonos depends on a number of factors; namely how hot, crowded and loud you like your holiday.

The Best Time To Visit Mykonos 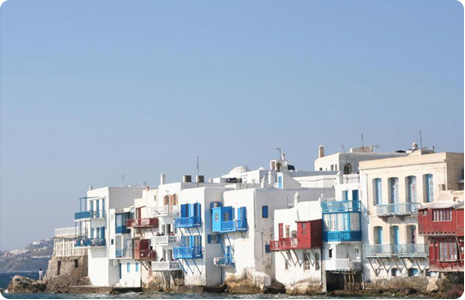 For many, early season is the best time to visit Mykonos as it offers a number of potential advantages. Through May and June, prices are considerably cheaper especially when it comes to accommodation so by going early you can literally save hundreds of pounds. If large crowds are not your thing, then early season is preferable also and while the temperature will be a little lower, it should still be between 20 – 25 degrees centigrade so the beaches will still be enjoyable, just a little quieter.

With far less party goers, the early season is a great time to visit the island for those looking for a romantic getaway with the one they love. A quite meal in Little Venice overlooking an Aegean sunset will make it feel like it almost isn’t real and when followed by a walk on a deserted beach with moon high in the sky, it really will seem like a dream.

If it is loud, never-ending parties that you are looking for, then the best time to visit Mykonos is the peak season period (July – August) when things are in full swing. For those who need the perfect tan, the temperatures are usually around 30 degrees in the day and stay above 20 through the night, which is ideal for the beach parties.

From sundown to sunup is when much of the island really comes alive and the cosmopolitan attitudes make it a fun place for everybody.  The island is a favourite with the gay and lesbian community and for those who like nude sunbathing, the beaches of Mykonos at peak season are one of the best places to be in Europe.
If you are looking to experience the nightclub scene while on Mykonos, then you will have to go between July and August as the most popular clubs such as Cavo Paradiso and Paradise Club Mykonos only open during these months.

The last couple of months see the temperatures drop back down into the early-mid 20s so the beaches are still nice to visit by post season but are starting to get quiet again. The vibe becomes much calmer and relaxed as the season winds down making it the perfect time for those who want to see the cultural side of the island.

A tour of the many attractions such as the museums, historical buildings and the nearby World Heritage site at Delos is done with ease in the cooler climate while the sea remains the perfect temperature to enjoy swimming and other water sports such as windsurfing and scuba diving.


No matter the time that you decide to visit Mykonos island, i'd suggest you to book a room to a good mykonos hotel such as saintjohn.
Location: Mikonos, Greece