- November 28, 2012
Barcelona is considered as one of the most beautiful and important cities in Europe. A very important element of Barcelona's identity is its rich history and artistic tradition. Tourists are able to spend a lot of their time touring through the city's spectacular streets and attractions. 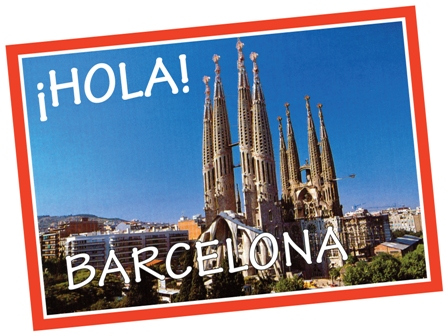 In Barcelona, we guarantee that there is something for everyone. Popular attractions include visiting the unfinished work of Antoni Gaudí, La Sagrada Familia, a majestic tribute to the city's (and country’s) rich Catholic tradition. If you aren’t familiar with Gaudí, you can also visit other places, such as Casa Milà, one of the most famous apartment complexes of the city. There are other popular art attractions and museums such as the Museum of Contemporary Art in El Raval, the Picasso Museum in La Ribera and the National Art Museum of Catalonia near Parc d'Atraccions.

If cultural events and attractions are not your thing, Barcelona also has a very lively nightlife, with dozens of bars and clubs throughout the city, especially near Las Ramblas. It’s not difficult to find exactly what you like in Barcelona.

Remember that there are two main languages spoken in Barcelona: Spanish and Catalan. The city is actually the capital of Catalunya and therefore Catalan is widely spoken by many of its inhabitants. It is not uncommon to find people that speak both Spanish and Catalan interchangeably. The Catalan influence and culture can still be seen all across the city. However, in many of the tourist areas you will have people who speak English as well as Spanish. Still, keep in mind that the two most spoken languages are Catalan and English. Barcelona is a contemporary European city with millions of tourist visitors, so it won’t be hard to find someone that speaks English.

Very few people are aware that if you live outside the European Union and come to Barcelona for a visit there are hundreds of shops completely tax free. Usually this means that you are able to save up to 18% of any item that you buy. Tax free shopping is only applicable to items that you will be taking back to your country. It’s also important to mention that this option is not applicable to restaurants or food items, since these items are not seen as exportable products (they are usually consumed while visiting the country).

Keep in mind that when any European citizen buys any goods within the EU they necessariliy have to pay a tax called VAT (Value Added Tax). In Spain the VAT is called IVA (Impuesto sobre el Valor Agregado). If you are visiting from America, you may be surprised to know that the VAT is invisible to the customer, since it’s already added to the final price. However, just about every item has the IVA or VAT added which means that every product is 18% more expensive. In Spain this excludes food items, books and other services which have a 7% IVA. Every single shop then gives the government back this IVA or VAT every fourth month when they do their accounts. This way, the government is able to claim additional taxes from the people without any extra work.