Discover the history of the Jurassic Coast

- November 28, 2012
The Jurassic Coast Dorset is one of the many places of outstanding beauty to visit in the UK, with the county offering everything you could want from a trip away - beautiful coastal scenery, peaceful countryside and picturesque villages in abundance. It is also a great place to discover more about the country's past.

This is because it is home to the Jurassic Coast - a section of shoreline that has rocks that are more than 185 million years old. With much of the cliffs and beaches remaining unchanged for such a long time, coming to Dorset could turn into a fascinating history lesson! 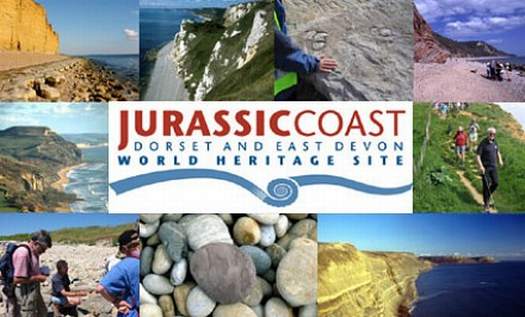 The Jurassic Coast spans 95 miles and has been declared a UNESCO World Heritage Site, becoming England's first natural location to be awarded this title. It is certainly a fascinating place to visit if you're interested in earth science, and many researchers and scientists have spent a long time here learning about evolution and changes in the planet's geology over time.

It is amazing that this one location has existed through the Triassic, Jurassic and Cretaceous periods. The Triassic era began between 250 and 200 million years ago and Dorset lay at the centre of the huge land mass that existed on earth, which was then called Pangaea.

Over time, this continent broke up during the Jurassic era (200 to 145 million years ago) and many geological changes occurred as a result - in the rocks in the cliffs on the Jurassic Coast, you'll discover sandstone, deep water clay, and limestone in varying layers. This demonstrates that the sea level rose and fell continuously throughout this period.

The continents began to move further away from each other from the Cretaceous age between 145 and 65 million years ago. The land consisted of salt flats, swamps and lagoons as shown by the layers of limestone and clay in the rocks.

Of course, during these three stages, the evolution of dinosaurs and other creatures ensued, with some of their remains becoming fossilised forever on the cliff faces. Not only will you find these fascinating to look at but they have also been able to teach scientists a lot about the types of animals that roamed the Earth during these times.

What is there to see?

From what we have said it is clear that the main things to see along the Jurassic Coast to get a taste of the geological processes that have taken place here are its cliffs and its fossils. Personally, I love going on the South West Coast Path National Trail, as this walking route enables you to soak up the beautiful seaside scenery, as well as get close to the ancient rocks.

This path is located along the entire stretch of the Jurassic Coast, so you can pick which part of the route you want to explore. I tend to choose a section that is closest to the holiday cottage in Dorset I am staying in, but the entire length is amazing to see, so you can go for a short walk anywhere along it and enjoy a lovely day out.

You can also go for guided walks if you find out when and where these are taking place from tourist information centres along the coast - these are a great way to learn more about the history of the shoreline from experts who know what they're talking about! Or, you can do what I tend to do and download a map of the trail from the Jurassic coast website and discover the region on your own.