Unusual Attractions for a Florida Fly and Drive Holiday

- October 22, 2012
There are an increasing number of travellers who want to experience the best of both worlds on their holiday. Flying to a new destination and experiencing a big city is part of the fun, but the other half involves getting behind the wheel of your hired vehicle and exploring some destinations that lay off the beaten path. While most tourists who visit Florida head to the typical attractions like Miami Beach and Walt Disney World, the large state offers plenty of unique options to those willing to look for them. Here are some of the great unusual attractions in Florida, each of which is perfect for a stop on a fly and drive holiday. 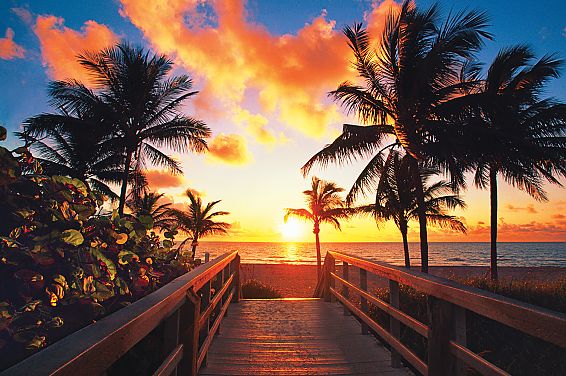 Ancient Spanish Monastery, Miami, Florida: While few people would expect to see the oldest building in the Western Hemisphere in the relatively new state of Florida, it is located in the surprising destination of North Miami Beach. The monastery was built in 1147 in Segovia, Spain, but was dismantled and shipped to America by the tycoon William Randolph Hearst. The structure today is unassuming and serves as the St. Bernard de Clairvaux Episcopal Church. Although it isn't included on your average tourist tour, it serves as the ideal stop on a Florida fly and drive holiday.

Dinosaur World, Plant City, Florida: Although the vast majority of families visiting Florida will head to the much busier amusement parts like Disney World and Universal Studios in Orlando, Dinosaur World is a more educational and far more affordable alternative. Adults and children of all ages will love the world's largest dinosaur exhibit, the life-sized dinosaur replicas and even a chance to dig for fossils.

Oldest Wooden Schoolhouse, St. Augustine, Florida: St. Augustine is one of the oldest cities in the United States and was settled in 1513 by Spanish explorers. It should come as no surprise, then, that it is also home to the oldest schoolhouse in the nation. The schoolhouse has been turned into a museum of sorts, displaying artefacts from more than 300 years ago. Current students, teachers and parents will be amazed at how different education was in the early 18th century. While in St. Augustine, head to the beautiful beaches, tour the impressive architecture and see the many historical landmarks in the area.

Salvador Dali Museum, St. Petersburg, Florida: Most people have heard of the famed Spanish artists Salvador Dali, a modern artist known for eclectic paintings, but you might be surprised to learn that many of his works are located in an unassuming museum in St. Petersburg, Florida. Drive there while on holiday in order to see some of his famed works and to learn more about the artist himself. Also in St. Petersburg are attractions like the Sunken Gardens and the impressive Pier Building.


Fly drive Florida in style! And explore those unusual attractions as well as the well-known ones for a discount price at http://www.travelcitydirect.com/holiday-types/flydrive/.