- October 11, 2012
When you think of the top beach destinations of Europe, chances are that certain coastal communities come to mind. Ibiza, Saint Tropez, the Greek Islands and even the shores of Croatia are probably the first locales that come to mind.

However, there is one European beach destination that is often overlooked, but worth a visit. Before the 1992 Summer Olympics, the beaches of Barcelona, Spain were often considered to be dirty and not anyplace that you’d like to while away a summer day. When the city was chosen as the host for the Games, though, organizers undertook a massive clean-up effort and turned what was once a dirty and polluted shore and sea into a pristine environment, worthy of a beach destination.

Not only is the sand and water of Barcelona’s beaches and harbor tested each day, but the city has added more access points, services such as bath houses, sunbeds and extra parking to make the shore a destination for both locals and visitors. Nowadays, it’s easy to find a beach destination along the shore just minutes from the center of Barcelona. 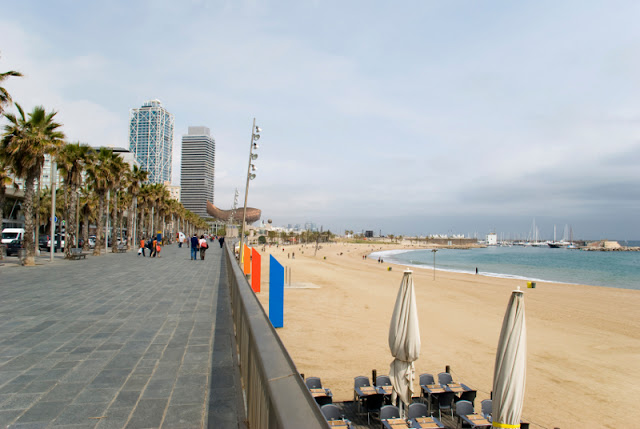 But how do you find the right Spanish beach destination? There are multiple spots to choose from, and which one is best for you depends on who you’re traveling with and what you hope to do when you arrive.


Most Popular Beaches in Barcelona

Tourism is one of the largest industries in Barcelona, and that is reflected in the most popular beaches near the city. The most popular tourist beaches are Barceloneta, Nova Icaria, Mar Bella and Bogatell.
Barceloneta is actually within walking distance of the city; walking at a good clip, you can reach the shore within 20 minutes from the end of La Rambla. As a bonus, along the way you’ll have the chance to see some monuments –such as the one honoring Christopher Columbus – as well as picturesque views of the Port Vell de Barcelona. Once you reach the beach, you’ll find a long, wide and sandy stretch lined with a boardwalk dotted with a number of bars and restaurants, most of them American-style, as this area is popular with tourists. The beach includes full facilities, including restrooms and changing areas as well as lounge chairs for rent.

Nova Icaria is near the Olympic Marina, and tends to be very crowded, but offers some of the best dining options close to the shore. It’s adjacent to Bogatell, which actually tends to be quieter thanks to the fact that the promenade is raised above the beach and that there aren’t as many bars and restaurants along the walkway. It does, however, offer full facilities and is popular with families.

If you’re more interested in watersports than lounging, then head to Mar Bella. At this beach, you can rent windsurfing and kayaking equipment, sail in a Hobie cat boat or rollerblade along the promenade.

While most tourists gravitate to one of the major beaches in Barcelona, there are some smaller enclaves that cater to special interests.

For example, families with children might want to drive a bit further out of the city to the Playa del Paseo Maritimo or Llevant. At this beach, kids can play on the wide beach or explore the extensive playground – or simply watch the skaters on the public half-pipe. If you want to get the “full” European beach experience, head over to Mar Bella, where you can sunbathe nude behind a private screen of bamboo.

In general, the beach season in Spain runs from mid-March through mid-November. The beaches are open during the winter months, but the public facilities are closed or dismantled, and many of the beachside restaurants are closed. Like many beach destinations, the summer months are high season and you can expect crowds.

Another thing to expect? Nudity. While some beaches (Mar Bella) have designated fully nude sections, it’s not uncommon to see topless women on most public beaches. If you want to go topless, look around to see how others are behaving. If everyone else on the beach is fully clothed, it might be a good idea to keep your clothes on as well.

While Barcelona might not be your first choice for a beach destination, don’t neglect to include a beach day in your visit. Just a few hours spent on the Mediterranean shore can be rejuvenating to the spirit, and some of the city’s best bars and restaurants are along the shore, making it a worthwhile part of any Spanish itinerary.

About the Author: A self-described beach bum, writer Kelsey Davis makes it a point to find a beach wherever she travels. While she’s visited beaches worldwide, she still calls the white sand beaches in her hometown her favorite.