If you love the city life but appreciate a sandy shoreline and swim in the briny blue sea,  there are plenty of cities with their own seaside settings. Whether it's natural or man made, the end result means the buckets and spades don't get left behind on a city break! Here a five particularly great city beaches :-

Beach It In London

The largest man-made beach in Europe is now open right near to the O2 arena in Greenwich, south London. Built on an old industrial site it offers a stunning backdrop of the Canary Wharf development. Using tons of special heavy white sand shipped from Norfolk, the end result is a Caribbean looking beach. Londoners and visitors will be able to play in the volleyball court, relax in various pop-up restaurants and bars and, during the Olympics, big screens will be showing live coverage of all the events! All we need is the good weather and the airports to keep the flights flowing through!

Barcelona is the perfect city-break destination, packed with outdoor markets, restaurants, shops, museums, art galleries and fantastic architecture. The waterfront, transformed for the 1992 Olympic Games, is now one of Europe’s most popular visitor centres. From the Olympic Port end of the beach, the famous fish-shaped sculpture rises up and you can find a great variety of entertainment and the Arts Hotel, reportedly Barcelona’s classiest hotel. On the beaches there are facilities for activities such as volleyball and sumo wrestling (with fat suits!), whilst the smooth onshore winds offer perfect conditions for kite surfing and windsurfing. For those up for a workout, check out the free open-air gym on the beach. 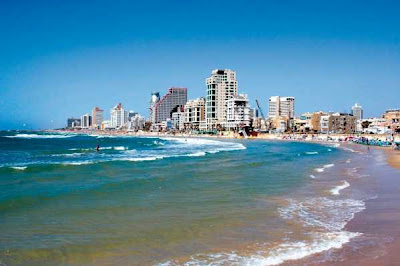 The Israeli capital boasts 13 beaches that span more than eight miles of the Mediterranean coast. This beach is the closest to the city and as you stroll on the golden sands there are kite surfers and people playing beach tennis which is unofficially the national sport. DJs and volleyball courts keep the crowds entertained. Changing rooms and freshwater showers are dotted along its length of the beach. Get in an early morning workout with a visit to the salt water pool. On Fridays, join the local people for a visit to Dolphinarian Beach – just south of the city, for the weekly music festival. It’s a great way to get your weekend off to a rousing start!

Kiev is a modern capital city but contains many monuments, museums, theatres, libraries and universities – including the famous Kyiv-Mohyla Academy. Despite being hundreds of kilometres from the sea, the area has 75km of sandy beaches stretched along the banks of the Dnipr River. Sun City is a beach club, easily reachable by metro. Most visitors prefer to tan on the beach and freshen up in the two swimming pools the club features. If you are feeling opulent, try the VIP section. The admission fee is £4 - £5.50 depending on the day of the week and kids go free! Next to the VIP area is a beach where you can play volleyball or just top up your tan and swim - admission is around 10 hryvnas, which is currently less than £1.00 sterling.

Dubai, enjoys a reputation as the world’s premier shopping destination, with numerous state-of-the-art shopping malls featuring popular international brands and where you can stroll through the dazzling gold souks; there’s over one hundred gold, platinum and diamond shops! Keep your eyes open for the best flight deals available - Virgin Atlantic fare one of the big names offering good deals to get you out here. So after a  wild shopping trip, take a ride up to the top Observation Deck of the Burj Khalifa (at 2,615 ft, the tallest tower in the world), and then head for the pristine waters of Jumeirah Beach - only 15 minutes away. You can sit in the shadow of the world famous Burj Al-Arab “7-star” hotel and the wide expanse of silvery sand. The blue Arabian Sea offers endless water sports opportunities, with sea temperatures ranging from 22°C in winter up to 35°C in summer. The beach park has plenty of cafes and the picnic spots are equipped with barbecue grills and wooden benches – great for weekend gatherings.