- July 13, 2012
Music Videos are set in some pretty fantastic places, so if the music doesn't do it for you, concentrate on the idyllic settings that the video has been filmed in! No bad thing as music videos can give you some really good ideas for places to travel to! Shift some of those old CDs onto musicMagpie - a perfect way to start saving for your next holiday, set somewhere exotic, of course! 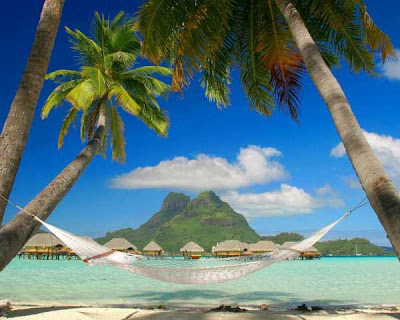 Peter Andres' first single released from his Natural album, Mysterious Girl, takes the prize for a video with a seriously exotic setting. Despite the obvious nods to Caribbean culture, the video was shot on one of the beautiful, white sand beaches of the Philippines. Although Mysterious Girl had all the ingredients to dominate the chart, its initial release failed to do so, being beaten to the top spot by Three Lions and Killing Me Softly. It finally reached Number 1 on its re-release - about nine years after its debut!

Weird, yes - strange, definatelly, shot in an exotic location, of course! Asereje, or The Ketchup Song, was a massive hit even outside of the mainland Europe bubble-pop. It reached Number 1 in England as well as 26 other countries worldwide. Although all the members of the band are from Spain, the video was filmed on Palm Beach, Florida, USA, where they got locals to help out as extras.

Geri Halliwell is famous for being the first ginger person to go to Sardinia and not get horribly sunburnt - as proven the video for her underground, gay-club hit Mi Chico Latino. Despite walking round the Mediterranean island in nothing but a bikini, she came away more or less unscathed.

Britney Spears has had her fair share of challenges,  However, shooting the video for Sometimes meant that she got to go to the beautiful Paradise Cove Resort on the famous Malibu beach in California.

No Mercy - Where Do You Go

Miami is one of the perfect places to film the archetypal exotic music video. The year round sun makes filming easy and normally music videos are able to be shot pretty quickly and hassle free. It is said that this was the reason it was chosen as the ideal place to film the video for No Mercy’s Where Do You Go, because the film crew were not so keen on the song as to want to travel far!

Israel Kamakawiwo'ole - Somewhere Over the Rainbow
To look at Israel Kamakawiwo’ole you wouldn’t have thought that he had the voice of an angel. When he died at 38 years-of-age, Iz weighed over 50 stone. However, looks can be deceiving because his soft voice helped to put his native Hawaii on the musical map. Hawaii was already on the geographical when Iz’s Somewhere Over the Rainbow was released but he still did his bit for the tourist board too, having his video shot across the different islands of the 51st US state.