- May 10, 2012
Marrakech, Morocco is truly a wonder of the world. It was an imperial capital for much of its ancient history, ruled by sultans and kings from the 11th century onward. The architects designed truly wondrous structures that defied all logic: great gardens in the midst of a desert, enormous towers that stood the test of time while dynasties rose and fell around them. For visitors to this North African country, there are a few sites that simply can't be missed. Never mind two hundred years of American history; in this land, centuries are mere blinks of an eye.

The Koutoubia Mosque towers over Marrakech, visible for miles in every direction. It was originally built in the 12th century, and its name derives from the Arabic word for 'bookseller', since the area surrounding it was once a lively manuscript market. The tall minaret, or tower, reaches 221 feet into the air, sitting on top of six rooms and adorned with copper globes. 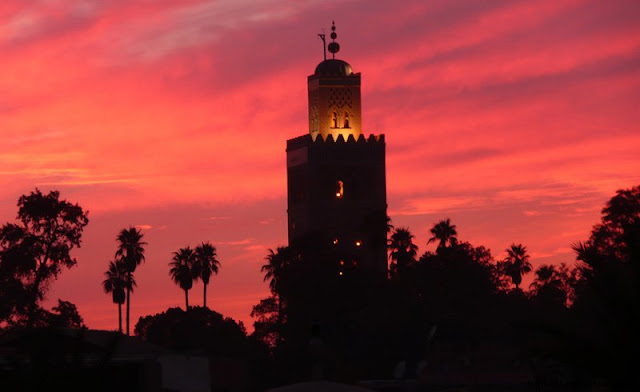 The structure is actually the second mosque in the area; when the first one was built, it was discovered that it was not exactly aligned to face Mecca. The Almohad dynasty, who'd commissioned the holy temple, ordered a second, properly aligned mosque to be built. The two structures stood side by side for many years until the old one collapsed due to disrepair; its ruins can still be seen in the desert sands.

Students in 14th century Morocco may have attended the Ben Youssef Madrasa, the largest Islamic College in the country. It was founded by the Marinid sultan and contains 130 dormitory cells, centered around a beautifully carved courtyard made of cedar, stucco, and marble. In accordance with Islamic law, the decorations do not represent any humans or animals, and instead consist of thousands of intricate inscriptions, patterns, and geometric mazes. This site is no longer a school, but was opened as an historical site in 1982.

The Saadian Tombs are a recent discovery, on an archeological scale: explorers stumbled onto the ruins in 1917, and they were restored for public viewing and have become a major attraction since then. The complex contains the bodies of members of the Saadi Dynasty, who ruled Morocco from 1554 to 1659. The most beautiful room is definitely the tomb of the twelve columns, which is made out of cedar and marble and finely carved—a fitting resting place for the grandson of sultan Ahman al-Mansur.

It seems impossible that lush orchards would grow in the blistering heat of the Moroccan desert, but Marrakech has quite a few of them—and they're not there because of the latest high-performance technology, either. The Agdal Gardens, for instance, were built in the 12th century by the sultan of the Almohad Dynasty, and enlarged seven hundred years later. The gardens, which are a UNESCO World Heritage Site, contain oranges, figs, lemons, pomegranates, and figs, as well as olive trees lining the walkways. The entire plot is 1.9 miles long, irrigated by an underground network of channels that brings down water from the High Atlas Mountains.

This guest article was submitted by Jamie Matzke who is a representative of THE Club, a Diamond Resorts International holiday program that allows you a world of choice and flexibility in meeting your vacation needs. Join us in Morocco at Diamond Resorts Hapimag Palmaire Marrakech for your next adventure.