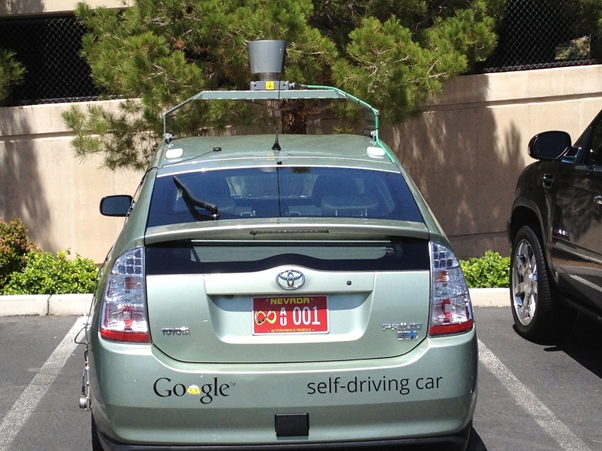 The Google Car, Image Source: Nevada DMV
Google has just received the go ahead from the Department of Motor Vehicles in Nevada to test driverless cars in the city of Las Vegas. Although this will be a fully functioning driverless vehicle, it will still require at least two people to be in the car at any one time. The car will operate by using range finder lasers, video cameras, radar sensors, and Google maps data to guide itself autonomously around the streets. It can ‘see’ the obstacles around it, whether they be human, vehicle, or stationary objects, and can steer itself around the streets to avoid these obstacles. If something were to go wrong, then the passengers have the ability to take control through the brakes or steering wheel. What the Car Sees, Image Source: Nevada DMV According to the Nevada Department of Motor Vehicles press release the new self-driving cars will be fitted with a red number plate displaying the infinity symbol to distinguish them from normal vehicles. Once usage of the vehicles has passed the test phase and the vehicles are being used by the general public, the autonomous vehicles will be distinguished with a green license plate.


So What Does the Future Hold?

OK so this is all very impressive, massively impressive in fact. But what does it really mean for our lives of the future. I don’t know, but I’ve got some ideas. Some of which are pretty simple, some others perhaps a little more imaginative.

1.) More Free Time
If we don’t need to drive then some of us will have a lot more free time on their hands each day. For those people that spend an hour commuting for work each way that’s an extra 2 hours in the day. 2 hours! Can you imagine what you could get do with an extra 2 hours each day – that’s an extra 10 hours per week, or more than an extra full day of office each week! I don’t know about you, but I’d love to have an extra day every week. Nice :)

2.) Less Accidents
I’m sure there will be some hiccups, but technology like this is surely to lead to less accidents. This is obviously a great thing. Enough said.

3.) No Taxi Drivers
I imagine that autonomous vehicles will take the place of taxi drivers pretty quickly. They will be cheaper to operate, will be willing to work non-stop around the clock, and will likely generate a return on the investment relative to their human cousins pretty quickly. Given that in some places around the world you can already order a taxi via an iphone app and track its location in real-time, I imagine that it won’t take long before were ordering self-driving cars.

4.) Augmented Reality In-Car Advertisements
Flowing on from the driverless taxis, I think it’s not too great a leap to imagine a future where people have the option to have the cost of their journey subsidised by in-car advertisements. I think that this would operate in much the same way as free applications for a smartphone – if you want the non-advertisement model then you pay more, if you’re happy to see some ads then you pay less. This is likely where Google sees a lot of opportunity. It would dovetail very well with their recent Project Glass announcement. If you’re envisioning being driven around the city by a car that has a number of advertisements, information, and augmented reality enhancements super-imposed onto local businesses and public amenities, then I figure you’ve conjured up a pretty likely image. I don’t know about you but I think this is a pretty cool version of the future. Couple this new hands off driving experience with some renewable energy powered vehicles and we’re really floating in happy Jetson-ville. Bring it on!

This post on Google’s foray into the land of vehicular transport was written by Steve Wilter, a guy who’s imagining the day when he will be able to Watch Movies Online during his daily commute. Steve looks forward to finally seeing a true automobile on the streets.