Melbourne, Australia is a perfect place for a trip - there's so much going on in and outside the city. It's the second largest city in Australia and the country’s cultural capital. There is beautiful Victorian-era architecture, extensive shopping facilities, galleries, theatres, museums, and loads of parks and gardens. It's very much a multi-cultural city and there is always something to do - visitors are actively encouraged to get involved! There are two airports that service the area and cheap flights to Melbourne are easy to come by. 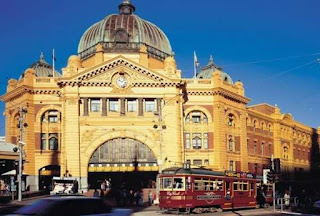 Keep up to speed with city life and check out events in Melbourne - it's got a thriving music scene, and there many festivals such as the Apollo Bay Music Festival, held 3rd week of April.

But if you fancy a break from city life, you'll find that Melbourne is also a great base for exploring the surrounding countryside. Just a short trip from the city you've got sea, surf, wildlife and wineries, so, if you are looking for some ideas -  here are a few to get you started!

This area, near Geelong, was voted the World’s Best Road Trip in 2003 and you will see why when you set eyes on the spectacular views from the Great Ocean Road of gorgeous beaches. The road, which winds through various types of terrain all along the coast, was added to the Australian National Heritage List in 2011. There are amazing natural sandstone rock formations - and the sunsets are formidible.

Yarra is the region best known for producing quality wine, and is filled with spectacular rainforest scenery. It's quite a cool climate here compared to the rest of the country, which means that the Yarra Valley is particularly suited to producing very high quality chardonnay, pinot noir and sparkling wines. There are over  120 wineries in the region, as well as top notch restaurants serving the local produce. Many touring companies offer trips through the relaxing scenery that let you eat, drink and be merry as you sample the delicious flavours of several Yarra Vallery wineries.

This tiny island is a popular tourist destination, visited by 3.5 million people per year. It is one of the few areas where you can see the rare species of Little Penguins and the largest colony of fur seals in Australia. You can also see wallabies and kangaroos close up and feed them by hand, as well as observe 300 animals including wombats, koalas, kangaroos, Tasmanian Devils and various birds.