- February 23, 2012
The UAE city of Dubai – the fastest growing city in the world – welcomes more than 10 million tourists every year. The consistently hot weather, the city’s reputation as the world’s top shopping destination and the outstanding entertainment, restaurants, bars and hotels in Dubai are regularly cited reasons for visiting the city and the tourist attractions dotted across the city only further extend the appeal.

Caitlin Xavier is the author of this guest post. She plans to take Dubai holidays next month thanks to a selection of late holiday deals that she recently stumbled across online.

Here are three fantastic current tourist attractions for anyone planning to take Dubai holidays and two to keep an eye out for in the future...

The Burj Khalifa skyscraper stands at a colossal 829.84 meters (or; 2,723 feet) high and is officially the tallest structure in the world. The building – which is the centrepiece of Downtown Dubai – took six years (2004-2010) and 1.5 US billion dollars to complete. Located within the tower are 900 separate apartments. 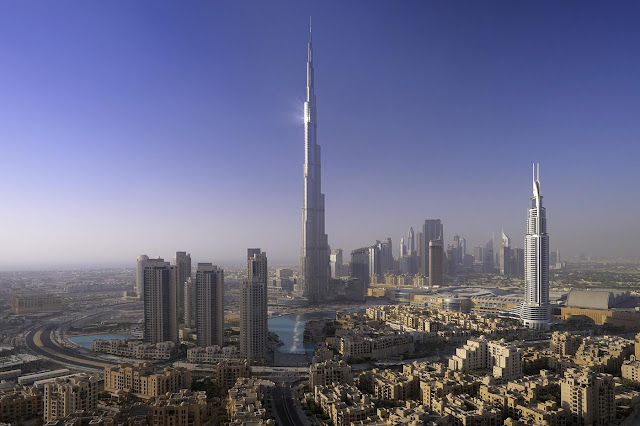 Interestingly, the tower was once known as ‘Burj Dubai’ but it was renamed during its opening ceremony to thank oil-rich UAE President Khalifa Bin Zayed Al Nahyan for his crucial investment in its construction during the global financial crisis (2007-2010).


Despite the construction being the tallest in the world, its’ At the Top observation deck (on floor 124 of more than 160) is only the world’s third highest observation floor (though it is the planet’s highest outdoor observation floor). The view that greets those standing here is breathtaking – anyone who pays the admission fee really will feel on top of the world!

Located close to the Burj Khalifa is the Dubai Mall – the world’s largest shopping mall. Dubai is known for being a fantastic location for those with a penchant for retail therapy and this makes perfect sense considering that there are 600 different shops from the world’s best known brands in this mall alone (and many more shopping malls litter the city). Dior, GAP, Burberry, Accessorize, Mulberry, W H Smith, Early Learning Centre, Waitrose and Hugo Boss are just a handful of the stores you will find within the gigantic mall.

In addition to retail, the shopping complex also contains many entertainment attractions, including Dubai Aquarium, Discovery Centre, Dubai Ice Rink, cinemas and the SEGA Republic indoor theme park. More than 750,000 people visit the mall every week and you definitely should too if you ever visit Dubai.

Dubai’s Wild Wadi Water Park welcomes hundreds-of-thousands of visitors every year. This is not surprising considering that this outdoor water park offers a variety of wave pools, surfing machines and 17 different “master blaster” (best described as uphill water rollercoasters) and “ring ride” (standard downhill) water slides to both locals and tourists enduring the never-ending sweltering climate of the city.

Wild Wadi is also home to an 18 meter (58 foot) tall waterfall that cascades on cue every ten minutes, as well as Jumeirah Sceirah; the tallest and fastest free-fall waterslide external to North America. The park also contains a slide that comprises three man-made “tornados” to create a truly erratic experience for riders.

Anyone staying at Dubai’s Jumeirah Hotel is allowed to enter the park free of charge but those staying elsewhere should definitely pay the park a visit should they get the chance.

Announced back in 2003, the DubaiLand entertainment complex-meets-theme park is nowhere near completion. At twice the size of Walt Disney World, DubaiLand was intended to be one of the most ambitious leisure developments in the entire world but the development was put on hold in 2008, due to both global recession and the cities financial crises.

The project – which was intended to included six individual zones containing theme parks (including Legoland and Six Flags), movie theatres, gaming zones, shops and hotels – has not yet been resumed. The only attractions within the 107 square mile plot that are currently completed are Dubai Motor City (a Formula One-inspired theme park), Global Village (a celebration of different cultures) and the Al Sahra Desert Resort (a popular venue located and dedicated to the desert).

It is hoped that further private and government investment will see the project – estimated to cost a whopping 63.4 billion – completed in the years to come. Here’s hoping!

Designed back in the year of 2007, The Cloud was a speculative design by Lebanese architect Nadim Karam. The design of the ‘Cloud comprised many slanted legs (designed to resemble rain) supporting a miniature city containing tourist accommodation and amenities 300 meters above the ground.

Tourists would reach the ‘Cloud using elevators built into one – or built between several – of the legs.
Karam commented that his creation was the “antithesis” of the towers which increasingly litter the city of Dubai, including the previously mentioned Burj Khalifa. In an environment where vertical space is continually developing and being utilised, installing a horizontal space above “empty” vertical poles is a refreshing concept. The inclusion of “rain” protruding from the cloud is also significant considering that Dubai very rarely sees rainfall thanks to its arid climate.

There are currently no plans in place to actually build The Cloud but we can continue to hope that this beauty will one day be a reality...