- January 17, 2012
Travellers embarking on an African safari holiday will often be keen to experience “Big Five’ game viewing. The phrase still conjures up exciting images of pioneering exploration in Africa’s most exotic destinations. The ‘Big Five’ in question refers to the African elephant, black rhino, Cape buffalo, lion and leopard.  Today, the Big Five represents the priority viewing of most tourists, and the Masai Mara National Reserve in Kenya is perhaps the best place to see these animals, at the end of a camera lens. Safari Consultants can organise a Masai Mara safari for you – taking you to the place where the Big Five, plus animals like cheetah, zebra and giraffe, roam the beautiful grassland plains. Below are some profiles of the Big Five animals, detailing just why they are so resilient to being hunted – the last two animals on the list are considered to be the hardiest of the Big Five. 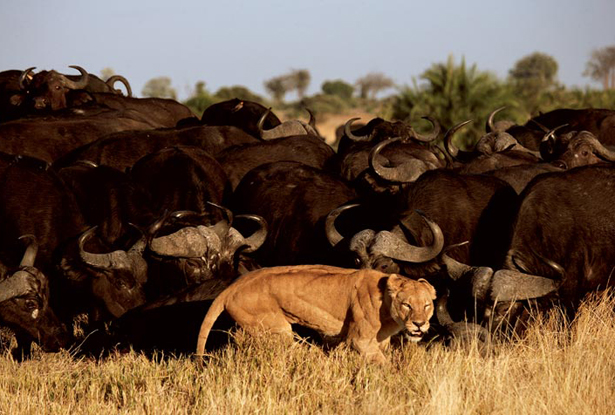 The African elephant attained its Big Five status thanks to its willingness to charge to defend itself. It is also adept at hiding amongst vegetation – a surprising quality to have for the world’s largest living terrestrial animal. In Masai Mara you will find the African Savannah Elephant, which is bigger and has larger tusks than the other sub-species of African elephant, the forest elephant. In adult life, elephant have no natural predator but the calves can be a target for lion and crocodile. Opportunist leopard and hyaena have also been known to attack infants.
Nature reserves have helped protect elephant – not against other animals but against the threat posed by ivory poachers. Scientists had estimated that if interventionist protective measures weren’t taken then the wild elephant would have become extinct by the mid-1990s. The IUCN Red List still classifies African elephant as a vulnerable species.

Black rhino has a canny sense of knowing where lurking danger might be but it’s not their eyes which alert them to risk. The animal has very weak eyesight but this is more than compensated for by its excellent sense of smell and hearing. It’s main enemy is man – poachers seeking “medicine”. Its predisposition to charge at any perceived threat  means that half of all adult males die as a result of combat-related incidents involving other rhino. It can survive up to five days without water during times of drought. Despite, or maybe because of its aggressive bent, Black rhino have an average life expectancy of 35 to 50 years.

The saying states that a leopard can’t change its spots but in fact this big cat is extremely adaptable to different environments and found throughout Africa including on the savannah grasslands of the Masai Mara.
Leopard are very difficult for humans to find because of their nocturnal and secretive habits. Unlike the Black Rhino their instinct is more flight than fight when confronted with danger – they can clamber up trees when quick shelter is needed. Their powerful jaws also mean that they can haul prey weighing as much as three times their bodyweight up trees with them. The leopard’s stealth means they often get blamed when a farmer cannot identify who has killed their livestock.

Male lions rarely live longer than a decade in the wild; injuries sustained from fighting other males severely reduces the average lifespan. Lions are not as well-suited to hunting unlike the lionesses  – their manes can lead to over-heating during bouts of exertion. However, their intimidation factor is enough to deter most animals from encroaching on their territory. Due to habitat loss and conflict with humans, the lion’s status is classified as vulnerable by the IUCN.

This buffalo is said to be the cause of more hunter deaths than any other animal in the world. Buffalo are a vital part of the food chain in Masai Mara – reducing grass level to the height that is ideal for other grazers. As a herd, they are capable of repelling attack from, and killing, lion and can more than hold its own against cheetah, leopard and hyena. Their physical resilience is honed through play as buffalo bulls often lock horns to ‘spar’ – sessions which only very rarely develop into full-blown acts of aggression.  Arguably the most-dangerous of the Big Five, the Cape buffalo is classified as ‘Least Concern’ on most conservation guides. As three-quarters of its population inhabit protected areas such as Masai Mara, the future looks optimistic for this fascinating creature.
africa masai mara safari
Location: Africa